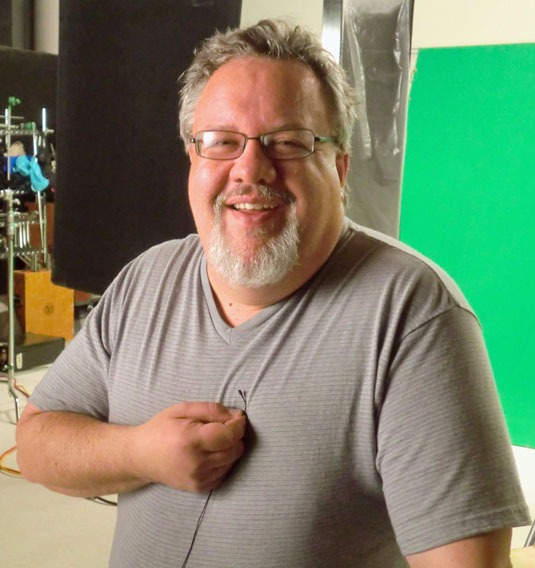 Bruno Strapko with his Countryman B6 Omni Lavalier Microphone.

Chicago, IL– January 2012… While the overhead boom mic will always have its rightful place for TV and film audio production, there’s nothing quite like a well-hidden subminiature microphone buried on the talent to capture one’s lines. That’s precisely why Bruno Strapko CAS, an independent location sound recordist and owner of Strapko Recorders, has become an ardent fan over the years of the various lavaliere and earset microphones from Menlo Park, CA-based Countryman Associates.

With over twenty-five years’ experience in the location sound business, Strapko has worked on TV shows, commercials, documentaries—you name it. He lists his work with American Express, the Chicago Black Hawks and the City of Chicago’s Olympic bid among his favorite projects. For the better part of the past ten years, he’s been working with a variety of Countryman microphones, including the B6 Omni Lavalier, the B3 Omni Lavalier, the E6 Omni Earset Microphone, as well as the EMW Omni Classic Lavalier.

When asked which Countryman microphone was his favorite, Strapko responded by noting the importance of using the right tool for the job. “I love the sound quality the Countryman microphones deliver,” he said. “These mics deliver a big, full-bodied quality that one would never suspect possible. By having a good mix of lavaliere and earset models, I have the ability to select the microphone that’s most appropriate for the nature of the project.”

Such was the case recently, when Strapko recorded former tennis pro John McEnroe for a U.S. Open commercial spot for United Airlines. He discussed the project and his reason for selecting the Countryman B6. “This job was unique because the shirt McEnroe wore for the shoot was a very lightweight, almost silk-like material. As a result, the material was much more difficult to work with in terms of supporting a lavaliere microphone’s weight as compared to a cotton sport shirt, for example. I was really concerned about the microphone ‘flopping’ around and the resulting noise this would create. Recognizing that I needed the smallest, lightest mic possible for this job, I knew the B6 was the best choice.”

“I placed the microphone directly below one of the shirt’s button holes and secured it with gaffers tape,” Strapko continued. “I then ran the cable down McEnroe’s back to the Lectrosonics wireless transmitter / receiver setup which, via my mixer, then fed the Hi-Def camera. Because the B6 is so incredibly small and light, it performed like a champ and never required re-adjustment the entire day. The mic couldn’t be seen against the black shirt and it did a phenomenal job of capturing his voice. The B6 has great pick-up characteristics and delivered the broadcast quality sound I was looking for.”

Having worked with Countryman microphones for the better part of ten years, Strapko was also quick to acknowledge Countryman’s customer support services. “Everybody has been fantastic,” he says. “The people I’ve dealt with always appear very willing to listen to the suggestions I’ve made and their responsiveness to the few support calls I’ve placed has been great.”

Before turning his attention back to the business of the day, Strapko offered this final thought on his experience with the Countryman B6 for the U.S. Open project. “This project came about very quickly,” he said, “so there was essentially no time to experiment. I was confident in the B6’s ability to deliver the audio quality required and knew that if any mic could be placed successfully on that material, the B6 would be it. The audio quality was first rate, the mic was completely hidden, and both the director and the client were really pleased. That little mic left some very big impressions.”

To learn more about Bruno Strapko, visit him online at http://strapkorecorders.com.