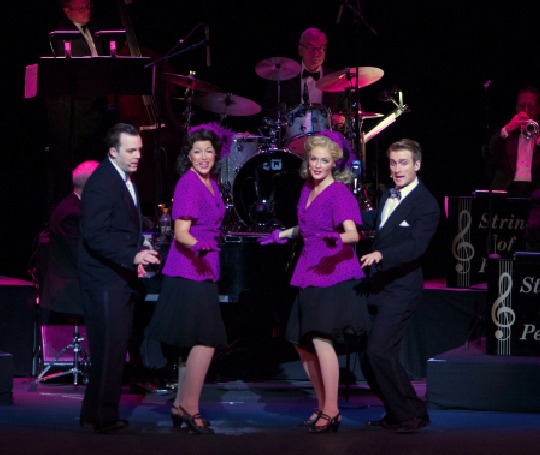 Cast members Mark Brignone, Jennifer Andres, Cori Cable Kidder, Tim Quartier (from left to right) appear in a scene from In The Mood.

From a musical perspective, the 1940’s epitomized the big band swing era: the clarinet and saxophone were ‘king’ and people danced to jazz-oriented bands such as the Count Basie and Glenn Miller Orchestras. The combination of up-tempo big band instrumentals and intimate, romantic ballads set the mood for a future filled with promise, hope, and prosperity. Much more than a concert, In The Mood—a musical revue of the 1940’s—features the In The Mood Singers and Dancers with the sensational String of Pearls Big Band Orchestra. Microphones are as important to the performances now as they were back then, but modern ultraminiature microphones and state-of-the-art wireless technology free the cast to move around and convey the show’s excitement.

Bud Forrest, In The Mood’s Creator, Producer, and Musical Director, discussed the advantages and challenges of using today’s microphone technology, and how he delivers the best possible sound reinforcement while travelling from venue to venue in what can only be described as a rough show tour itinerary. “The music of this period moved the nation’s spirit,” Forrest emphasized, “and so the music and the arrangements in this show are as authentic as it gets. With a cast that includes six singers and dancers that are accompanied on stage by a 13-piece big band, it was important to have microphones that could not only help project the voices, but do so in a way that was not visually distracting or ‘out of sync’ with the era the show depicts. And since the show tours approximately twenty weeks per year, reliability was a critical consideration.”

All six of the show’s singers / dancers use Countryman E6 Omni Earset microphones, interfaced to Shure ULX wireless bodypack transmitters. Shure ULXP4 diversity receivers—coupled with half wave antennas—constitute the receiving end of the setup. The touring company owns both “classic” E6 and E6i units. Both the E6 and the E6i use the same microphone capsule: a 0.1-inch diameter element that is positioned right next to the user’s mouth by a stainless steel boom to deliver extreme isolation from other actors and the band on stage. However, the E6i uses a more flexible boom that can be bent and reshaped repeatedly.

These different mic booms address very important considerations, according to Brian Lloyd, who travelled with the company for seven years as the sound engineer and now serves as the show’s audio consultant, “We use the E6’s for the swing dancers due to their ability to hold their boom shape more securely during fast wardrobe changes and dance routines,” he explained. “The E6i’s are used on the singing cast because of their ability to bend perfectly and better fit the contours of the actors’ faces.”

Colin Harty, the show’s current sound engineer, is equally pleased with the Countryman mics, “With the E6 earsets, I’m able to achieve higher gain before feedback, and this helps me provide the vocalists and musicians with plenty of level in their monitors. The discreet appearance of the E6 microphones is wonderful and they stay put on the dancers—allowing them to move about freely while delivering a clean, crisp sound. Numerous times, patrons will ask me how the performers sound so clear when they can’t see any microphones. My response is always, ‘That’s the point, they didn’t have wireless in the 40s,’ and we share a laugh.”

In years past, the show utilized nine floor monitors. These days, however, Sennheiser ew 300 Series in-ear monitoring systems are deployed, thus providing a complete wireless solution for the performers. “Both the E6 and E6i perform wonderfully,” Lloyd adds, “and back when we were using the floor wedges, we experienced minimal feedback issues with the Countryman mics, which is another important trait.”

With their compact form factor, the wireless systems facilitate the freedom of movement so essential to a show of this nature while being undetectable under wardrobe. Each cast member wears an elastic belt and attached to that belt are two pouches that hold the wireless transmitters and receivers. The pouches are fitted to each bodypack unit to ensure they will not slip out during performances. The belts are worn either around the performer’s waist or up around their chest, depending upon the costume and the physical movement involved in any particular scene.

The heat from the lights and the nature of the costumes can easily make a performer perspire; and moisture has traditionally been one of the biggest challenges of using wireless microphones in a theatrical environment. “These pouches keep the transmitters secure and dry,” says Harty. “Equally important, the Countryman mics are highly resistant to perspiration, so together, we have a very robust wireless mic setup. I really enjoy the sound quality the combination of Countryman mics and Shure wireless systems provides.”

To further ensure consistent sound quality, the show travels with an Avid Venue SC48 digital mixing console. Lloyd reports the desk has a 48-input / 32-output configuration and is used for mixing both FOH (Front of House) and Monitors. The show’s 27 inputs ultimately result in 6 stereo in-ear mixes, 3 stage mixes, 8 mono stem mixes (for monitors), and upwards of 9 PA zones.

In addition to a very active domestic performance schedule, In The Mood recently completed 32 performances in Auckland, New Zealand as well as Sydney, Perth, Melbourne, Brisbane, Canberra, and other locations throughout Australia. Reflecting on the show’s hectic schedule and the abuse all the equipment must endure, Forrest offered this final thought. “As the producer of In The Mood, I have to work with many, many companies that supply all of our equipment for sound, lights, music, costumes, and so forth. Like Brian and Colin, I am extremely impressed with the performance and durability of our microphones. There is no doubt that the people at Countryman care about results. They have spent considerable time and energy to ensure the use of their microphones helps make our show sound great—and, for us, that’s what it’s all about. For over 19 years, our audiences have benefitted from their efforts.”