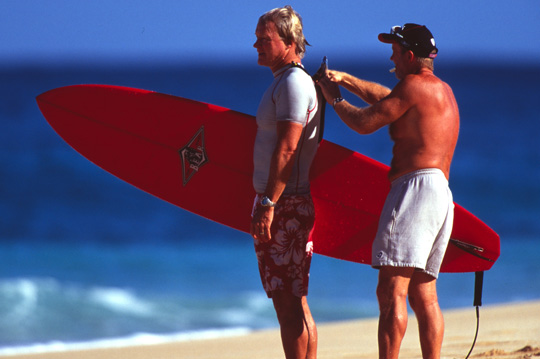 Oahu, HI… If there’s one thing that, above all else, brings electronic equipment to its knees, it’s saltwater. The very prospect of wiring a surfer with the necessary equipment to capture the ambient sounds that occur while riding the waves is enough to cause most audio pros to say, “Not with my gear!” For years, onscreen surfing action was akin to the silent movies of yesteryear—until Tim Denmark came along. Equipped with an arsenal of B3 Omni Lavalier and EMW Omni Lavalier microphones from Menlo Park, CA-based Countryman Associates and wireless technology from Rio Rancho, NM-based Lectrosonics, Denmark has created a niche for himself that brings the excitement of surfing—complete with crashing waves and the slap of the surfboard over the water—right into the homes of television viewers the world over.

Denmark, owner/operator of Leucadia, CA-based H2audiO, which specializes in professional audio for aquatic sports, has become the “go-to” guy whenever the actual sounds of surfing are required—be it for TV or film. When he’s not working in the water, he also serves as an RF audio engineer for the NFL games televised over the Fox network. An avid surfer himself, Denmark explained, “I remember surfing the famous ‘Pipeline’ in Hawaii, with its big tubular waves, and being so impressed by how loud it was. As an audio pro, I was bothered by the fact that whenever I watched a televised surfing competition or a surfing movie, there never seemed to be any audio. If audio did exist, it was handled via Foley (post production sound effects) and it just didn’t sound the way I knew it should. I knew I could make it better, and that led me to the use of Countryman mics and Lectrosonics wireless systems.”

Currently, Denmark uses a dozen Countryman B3 Lavalier mics, which serve as his primary go-to surfing microphones. “I’ve tried other microphones,” Denmark says, “but they just don’t hold up under the extreme conditions the way my Countryman mics do. I doubt there is any tougher environment than saltwater for a microphone, which is where the bulk of my work takes place. I use the Countryman B3 for most of my water audio, be it for ambient sound or for ‘in water’ commentary. It’s the most robust mic of this type I’ve ever encountered.”

The Lectrosonics wireless equipment used by Denmark for this application includes 24 MM400 A and B Series water-resistant transmitters and 10 Lectrosonics UCR211 UHF receiver systems.  He discussed the process of wiring a surfer up, as he recently did during his work on the Volcom Pipe Pro surfing event at the Banzai Pipeline on the north shore of Oahu.

“The process of wiring a surfer for audio involves a specially made Lycra® shirt, or rash guard, that has a pocket on the inside middle of the back,” Denmark explained. “Sewn into the rash guard is a channel that extends from the pocket up to the collar. With the Lectrosonics MM400 wireless transmitter secured in the back pocket, both the transmitter’s antenna and a Countryman B3 Lavalier microphone with a water resistant capsule extend up the shirt’s channel to the collar. The antenna is attached to the back of the shirt while the B3 microphone is affixed to the front of the collar. This setup enables me to capture every audible sound as the surfer rides and through it all, my MM400’s and B3’s have performed beautifully.”

“Until roughly four years ago, when broadcast surfing competition was moved elsewhere; the most visible, televised surfing event on a major network was the X Games on ABC,” Denmark continued. “For these projects, I’ve had as many as 15 people at a time wired and in the water with mics. This included two teams—each with 4 surfers, 2 alternates, and a coach, plus the show’s announcer—equipped with a Lectrosonics MM400B and R1a IFB transmitter/receiver system for communication with the show’s production crew. Through the entire competition, the audience could hear the interaction between the surfers and their coach in addition to the ambient sounds of the water. The ability to faithfully capture these sounds adds an element of realism for TV viewers to experience that, previously, was sorely lacking.”

In addition to his Countryman B3’s, Denmark is also very fond of his two Countryman EMW Omnidirectional Lavaliers, which he deploys specifically for recording as opposed to live sound for broadcast. He explained the process, “There’s a company called H2O Audio that makes waterproof accessories for sports enthusiasts. I use the Countryman EMW attached to an H20 Audio armband that has been modified to hold a Zaxcom ZFR100 audio recorder. This enables me to capture ambient sounds that can be inserted into a film during audio post production. I can send someone who’s been ‘wired up’ out to record the sound of breaking waves.  This technique was used on a forthcoming film called Of Men and Mavericks, starring Gerard Butler and Elizabeth Shue. The EMW’s deliver absolutely amazing ambient sound.”

Before turning his attention to his next project, Denmark offered these final comments, “I’ve been using Countryman microphones with Lectrosonics wireless gear for several years now and I couldn’t be happier with the results. I am very pleased with all aspects of my relationship with both companies. We continue to work together to get the cleanest, fullest ambient sound from the water. This year promises to be groundbreaking in the field of audio for the sport of surfing and both Countryman and Lectrosonics will be along for the ride.”