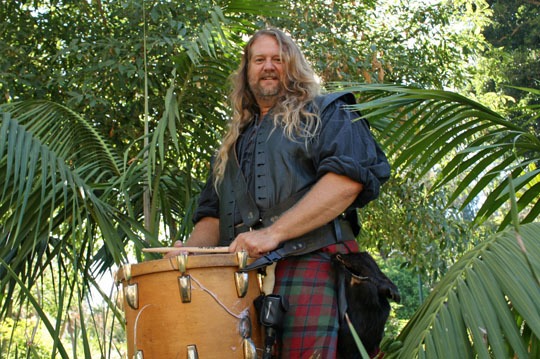 Los Angeles, CA — July, 2012 … Since 1995, Wicked Tinkers have been playing haunting, heart-pounding bagpipes and irresistible tribal drums as a professional touring ensemble. Combining the best of modern, almost rock-and-roll energy with the hypnotic, insistent grooves of their Gaelic ancestors, this might have been the music you would have experienced hundreds of years ago at a Scottish wedding celebration, or perhaps around the campfire of a Highland raiding party. Their music has a raw, exciting sound that touches you on a primal level—and part of the ensembles’ unique sonic signature can be traced to state-of-the-art microphone technology from Menlo-Park, CA-based Countryman Associates.

Keith Jones, drummer for Wicked Tinkers and owner of Musicians Performance Studios, Inc. of Rancho Cucamonga, CA, assists with many of the ensemble’s technical responsibilities and considers the Countryman B6 Omnidirectional Lavalier microphone an indispensable tool in the studio and during performances. Wicked Tinkers deploys the high overload level (W7 version) B6 microphones on both drum/percussion instruments and the bagpipes.

“We use the Countryman B6 on two snare drums, one hand drum, one tapan drum (also known as a davul), one for the bagpipe drones, and one for the bagpipe chanter,” Jones explained. “These mics are interfaced with Sennheiser wireless systems and, together, they make a formidable setup.”

“The chanter is the part of the bagpipe a player uses to change the notes,” Jones continued. “Here, the B6 is placed at the chanter’s bottom open end on the edge of the hole, or opening. For the drones—the three pipes that stand tall behind the player—the B6 microphone is positioned on the top of the middle drone at the edge of the opening. Used in this manner, the B6 mic helps us achieve a bigger, more natural sound for the listener. With its incredibly small, discreet design, the B6 also helps us maintain the natural appearance of the bagpipes, as opposed to having a big, bulky microphone awkwardly mounted on the instrument.”

Jones reports the Countryman B6 mics assume an equally important role for the drums and percussion, “With the drums, we place the B6 microphones on the edge of each drum facing the center of the top batter, or drumhead, to pick up all the instrument’s dynamics while we’re playing. Placing the B6 microphone close to the drum also helps keep unwanted surrounding noise from bleeding in. The mic has excellent rejection characteristics, so we’re able to capture the instrument without picking up a lot of ambient sound. For these instruments, having the B6 microphone has been like a gift from Heaven.”

Wicked Tinkers performances involve quite a bit of movement and, here too, the Countryman B6 microphones have really helped the ensemble focus on the music. “Wicked Tinkers are known not to just stay on stage when we play,” says Jones. “We routinely go out into the crowd during a show. The B6’s big sound and incredibly small size really helps make our shows that much better. We had many challenges in the past with microphones shaking off the instruments or just not staying still. But the B6 stays put and we never worry about it coming loose. We frequently have people ask how we get such a sound when we’re not miked. When we show them the B6, they are shocked by its sound quality and discreetness.”

As is the case with any professional performing group using musical electronics, quality customer service and technical support is crucial. Here too, Countryman Associates received high marks from Jones. “Countryman’s customer and technical support service is superb — 5 Stars!” he says. “It is so refreshing to actually talk to someone when you call and not get a machine or the corporate runaround. Countryman has always been very responsive.”

Before turning his attention to forthcoming projects, Jones offered this final thought, “If you want a top quality, versatile miniature microphone, I highly recommend the Countryman B6. This mic does wonders for instruments and voice alike, and with their first-rate customer support, Countryman is a tough act to follow. Once you hear Countryman microphones, you’ll want to own them!”