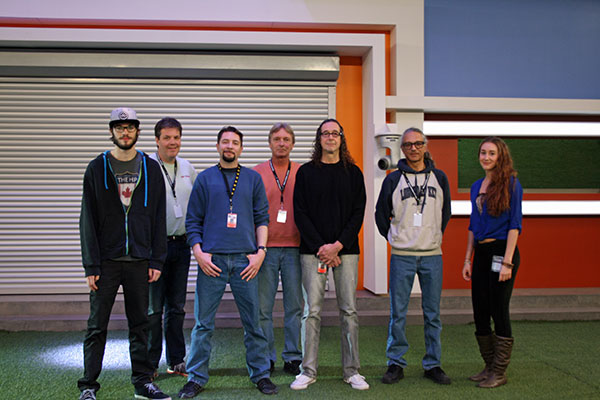 The crew of Big Brother Canada.

Toronto, Ontario, Canada… As one of the largest reality show franchises on television, Big Brother follows a group of strangers living together in a house outfitted with dozens of cameras and microphones recording their every move 24 hours a day, seven days a week. One by one, the House Guests vote each other out until, at the end of three months, the last remaining House Guest wins the grand prize. Big Brother Canada, produced by Insight Productions Company LTD. for Shaw Media Inc. and airing on both Global and Slice television, allows one to see how people react when forced into close confinement with others outside their comfort zone. Capturing the interactions of the contestants is what makes the show so interesting and to ensure not a snippet of dialog is missed, B3 Omnidirectional Lavalier microphones from Menlo Park, CA-based Countryman Associates are used extensively.

Toronto-based audio designer / operator and consultant Kent Ford is one of the key production staffers on Big Brother Canada. With a background encompassing both audio engineering and supervisory duties dating back to 1985, Ford has worked on numerous big television productions, including MTV Canada, the 2010 Olympic Games in Vancouver, and the 2012 Games in London. He discussed the challenges of capturing audio on Big Brother Canada and how the Countryman microphones helped with production.

“It’s important to recognize that contestants are isolated in the house,” Ford explained, “without access to television, radio or the Internet. They are not permitted routine communication with the outside world, and this includes the show’s production staff. Once outfitted with their microphones, they handle tasks such as battery replacement and other technical aspects that enable us to monitor their activities. Because of this ‘hands off’ approach, it’s absolutely essential that all the equipment—especially the microphones—be extremely durable while staying out of site. It was this very need for robust, reliable performance that led us to use the Countryman B3 mics.”

“We have fifteen Countryman B3 microphones on the set,” Ford added, “and because of the necessity of having to devise a system that would not only be low profile visually, but also be durable and well suited to the activities that take place in the house, all of the contestants were outfitted with a B3 lav that was integrated into a versatile necklace. We were extremely fortunate to have the assistance of Countryman’s technical and engineering departments, which helped us deploy a system that could handle everything the contestants would encounter.”

For the show, Ford and his crew deployed the CountrymanB3 Necklace Mount, which consists of two adjustable clamps with set screws and a length of high-strength cord. This kit works together with the B3 Lavalier to enable a variety of extremely low-profile, neckworn mounting techniques. The Necklace takes advantage of the B3’s durability—especially the aramid-reinforced cable—to make a very low profile mounting system. The B3 Necklace Mount is ideal for those environments where traditional mounting locations are challenging, where robust performance, discrete appearance, or the ability to wear the microphone long term are required. As such, it is particularly well suited for reality television work, where performers may wear swimsuits or change costume without assistance from sound crews—as is exactly the case with Big Brother Canada.

In addition to the Countryman B3 Necklace Mount, a number of the Countryman B3 microphones are also used as plant mics in water specific areas. Here too, the low profile visibility and the B3’s resistance to water made the microphone an ideal choice for use on the show.

When asked about those attributes that made the Countryman B3 the ideal choice for use on the show, Ford offered the following, “In addition to the B3’s water resistance and its ability to keep on working even when wet, the microphone delivers very natural, clear sounding audio performance. Without excellent sound quality, not much else would matter. For Big Brother Canada, we use the mics with Lectrosonics wireless systems and, together, they make a very compelling package.”

Before shifting his attention back to the business of the day, Ford offered these final comments. “I’ve been using Countryman products since 2000, he said, “and I continue to be impressed with both the products and the company. In addition to the B3, I’ve also worked with the company’s B6 Omnidirectional Lavalier, which is incredibly small and easy to conceal. Countryman’s customer support services are excellent—they’re always willing to work with you to devise a solution specific to a show.”

“Production for Season 2 has ended and Season 3 is just around the corner,” Ford added. “These mics have been submersed in water—pools, hot tubs, showers and bath tubs—and have never failed. Once contestants enter the house, we as operators have no connection with the mics for the entire time they are used in the house. They just have to work and the Countryman mics have never let us down.”

To learn more about Big Brother Canada, visit the show’s website at http://bigbrothercanada.slice.ca/.