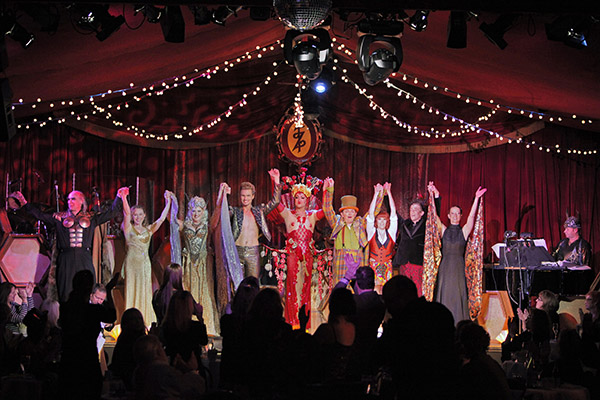 The Teatro ZinZanni cast finish a show under the Spiegeltent.

As seen in FOH Online

Sound design creates a unique experience in a unique space

Dreams and divas, music and madmen, cirque and sensuality – this is Teatro ZinZanni. Originating in Seattle by Pacific Northwest nonprofit arts and events producer One Reel in 1998, Teatro ZinZanni is now also set along San Francisco’s historic waterfront on Pier 29 at the Embarcadero. The show is one of just a handful of such venues left in the world, and it’s all staged in a luxurious European Spiegeltent. While guests enjoy a gourmet five-course dinner, they are surrounded by a whirlwind of entertainment. Providing proper sound reinforcement for the show is no small undertaking in this theater-in-the-round, and it’s the responsibility of Rob Tomaszewski to ensure its success.

Tomaszewski is Teatro ZinZanni’s sound supervisor/designer. His responsibilities are considerable and include designing audio support for the shows (including sound effects), specifying the choice of equipment, managing assistant technicians – even running the console at FOH. New shows are introduced roughly every three months, so there’s no shortage of sound reinforcement challenges. The current offering, License to Kiss II – A Sweet Conspiracy, is no exception. In an environment where the entertainers mingle among the audience and perform acrobatics above, freedom of mobility is critical. For this very reason, the selection of microphones and accompanying wireless technology is crucial, as Tomaszewski explained.

“Unlike a traditional proscenium-type theater,” Tomaszewski notes, “where the stage, entertainers, and the house mains all face the same general direction toward the audience, we have loudspeakers facing every which way. This type of physical layout creates a challenging condition for any microphone – particularly if it’s going to be used in close proximity to the loudspeakers. What makes the show so challenging is the fact that, being theater-in-the-round, the performers are all over the place, including being among the audience. They are routinely in close proximity to the house loudspeaker system – sometimes within inches of a loudspeaker – so working with microphones under such conditions is a real challenge, and achieving suitable gain before feedback can be daunting.”

The sound reinforcement system at Teatro ZinZanni is comprised of a combination of Meyer Sound UPA and UPM 1P series loudspeakers as well as EAW JF80, JF60, and SB48-D2 series loudspeakers, and it is divided into multiple zones. There’s a center truss that has both lighting and loudspeakers, and around the perimeter of the tent, there are support columns with loudspeakers mounted on them. Some of these speakers face into the center of the theater while others face outward and provide coverage for the spectator booths that ring the perimeter of the space. There are additional loudspeakers to provide coverage to the tables in front of the stage, with still more loudspeakers and subwoofers that face into the main room. The space has been carefully tuned for proper time-alignment and loudspeaker positioning. Tomaszewski also deployed acoustical treatment using Sonex curtain, which is custom-fitted to the interior.

The current show has a cast of nine and is augmented by a five-piece music ensemble. Seven of the performers are outfitted with Countryman E6 omnidirectional earset microphones, with the lead actor wearing two such units – one serving in a backup capacity. 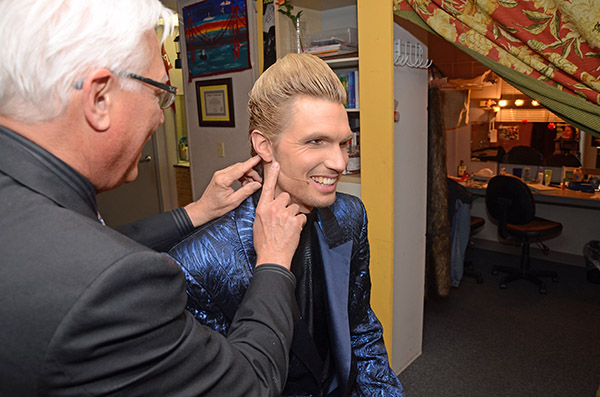 “I’ve become very good at fitting the E6 on the talent,” says Tomaszewski. “With the multiple colors that Countryman makes available to match skin tone, they’re as close to invisible as you’re likely to get, and they’re extremely durable. We even feature a performer who wears an E6 while performing aerial acrobatics. With each new show, I typically instruct the talent how to handle and put the mic and beltpack transmitter on and, from there, they handle it on their own. For more involved costumes, a wardrobe mistress assists the talent.” 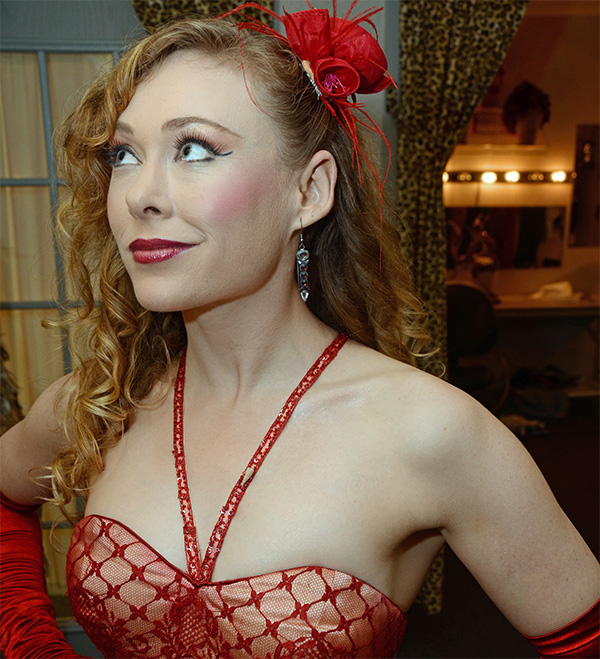 Hidden in the strap of her costume, the miniature B3 Lavalier never leaves Teatro Zinzanni aerialist Kari Podgorski hanging.

In addition to the E6 omni earset microphones, the show’s sound system also relies upon several Countryman B3 omnidirectional round lavaliere microphones. “Four of these mics are used on the two tap dancers,” he reports. “We have a special Y-cord that enables us to use a single transmitter with two mics – one on each shoe. This way, we capture all the tapping as the dancers perform their routines. These mics also perform double duty as more traditional lapel mics. The B3s are used when there are on-stage costume changes, such as when an actor removes a jacket to reveal their acrobat costume. In cases like this, the B3 and bodypack transmitter are discarded along with the jacket – leaving the talent free to perform their act. Our opera singing Diva wears a B3 on her forehead, concealed under a wig. It’s the perfect mic for capturing the full resonance of her voice.”

Shure UHF-R Series wireless systems are used with the Countryman microphones. “We have a quite a history with Shure products,” Tomaszewski notes. “We’re now using the Shure UR1 bodypack transmitters and UR4+ diversity receivers, which have proven to be a good match with the Countryman mics. This combination provides the performers the freedom they need with the dropout-free audio performance I require. Most of the music is live. The exception is for specific acrobatic or aerial routines, where the timing of various cues is critical to the performance. Regardless of the music source, this show goes up to rock ‘n roll volume levels and, still, I can get the Countryman E6s to provide all the level I need to fit right in with the rest of the mix. To me, that’s remarkable.”

Countryman Type 85 direct boxes are another key element for Teatro ZinZanni’s sound. Two such units are interconnected between the left and right Hi-Z outputs of the electronic piano and the corresponding Lo-Z inputs at the house console. Another Type 85 DI is used with a Korg synthesizer to feed the mixer. “The Type 85 direct box goes a long way toward achieving the best possible sound quality form the keyboard instruments,” Tomaszewski says. “Occasionally, I’ll use one on the bass, as I prefer the sound quality of this approach compared to taking a direct feed from the Lo-Z output of a bass amp. The DIs are much more accurate.”

“I also use Countryman Isomax 2 hypercardiod mics with Shure transmitters on the sax, clarinet, and accordion when the musicians roam the tent,” Tomaszewski adds. “They sound great, and Countryman’s selection of mic clips for specific instruments is a real plus, as they provide a very clean and secure mounting.”

Upon entering the Teatro ZinZanni Spiegeltent, the show’s production booth is located just inside and to the left. This area houses both the lighting and sound booths as well as the production manager. At the FOH mix position, a Crest X8 mixing console is configured with 40 mono plus 4 stereo channels. Tomaszewski reports that all 44 channels are in use during the show. 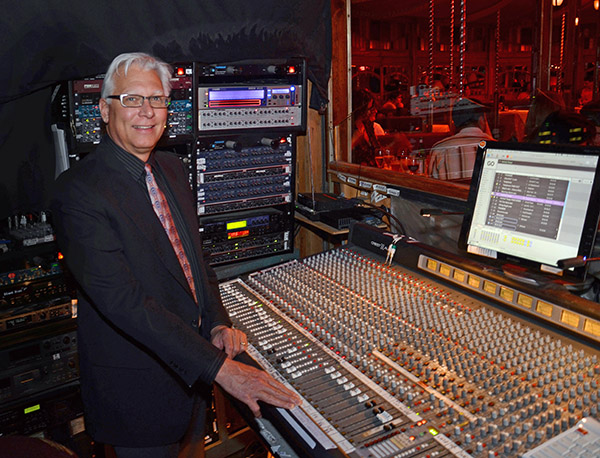 Rob Tomaszewski at the console.

“We have a unique blend of new and old equipment,” says Tomaszewski. “Our console’s been with us for quite some time, as has the BSS FDS-355 OmniDrive that we use for loudspeaker management. For EQ control with the Countryman mics, we use a Klark Teknik Helix DN9340 Dual EQ inserted on the subgroups. This setup provides a subgroup each for the E6s and the B3s. Sound effects are triggered with QLab 2.3 show control software for the Mac.”

Reflecting on the Madness

Being in the heart of San Francisco’s popular waterfront district, Teatro ZinZanni routinely mesmerizes both locals and tourists. “People come here and are amazed at what they see and hear,” says Tomaszewski. “When you realize how close the performers are working to the loudspeakers, the Countryman mics are just amazing. Compared to other mics I’ve tried, I’ve managed to squeeze out a good 5-8 dB of additional gain before feedback, which is incredible. When you consider that many of the performers are acrobats – as opposed to trained actors – the results we get are astounding. Many of the performers have never been trained how to project their voice. They whisper, they yell – they’re all over the place, so getting a consistent sound level and quality from them is very difficult. With the Countryman mics, I don’t need to be anywhere near as concerned about this sort of thing as I would be if I used many other mics. These mics enable me to work with untrained vocal talent and get everything I need to project quality sound.”