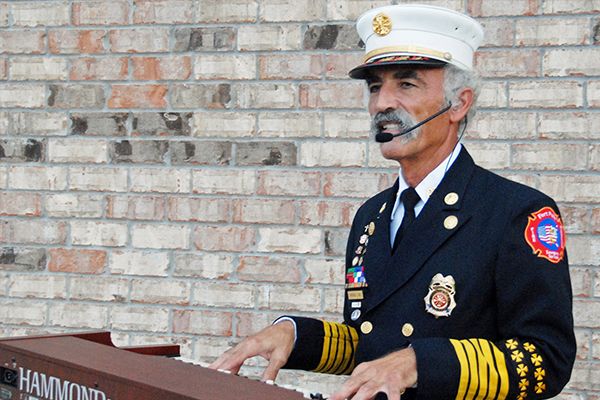 Madison, WI – Fort Polk, LA … For those who perform as a one-man-band, the challenge of balancing instrumental performances with vocal performances is never ending. If a timbre change is required during the song, it’s very easy to lose the vocal performance while reaching for the right preset. But too much focus on maintaining proper microphone proximity can be just as damaging. One wrong button push and that piano sound can easily become a tuba! This is why so many solo performers rely on headset microphones – particularly models like the ISOMAX Headset from Menlo Park, CA-based Countryman Associates.

Chief (ret) Michael L. Kuk, PhD., Fire Chief Emeritus for the United States Army, knows these challenges very well. For the past twenty years, he has performed at a wide range of military and civilian ceremonies. As a lifetime member of the International Association of Fire Chiefs who has led fire departments including military, Federal, combination, volunteer, industrial, and career departments for the past 35 years, Kuk understands the nature of the occasion and the types of music that are appropriate. Using a combination of synthesizers, samplers, and a drum machine to complete his one man solo act, he wears Countryman’s ISOMAX Headset mic to ensure the vocal performances are never compromised by the logistics of having to operate his musical electronics.

“I sequence my bass lines and drum machine parts,” Kuk explained, “and then use them as I play piano, organ, and synthesized sounds for my overall musical endeavor. These orchestrations easily cover a variety of musical styles ranging from pop and rock to ceremonial-type pieces. In the military venues, these are frequently Change of Command ceremonies and, in the civilian sector, they are patriotic and remembrance ceremonies. In the Firefighter specific realm, these events are usually annual memorial events or related solemn ceremonies.”

“The ISOMAX moves with you,” Kuk continued, “and that is such an incredibly important feature for a busy keyboardist, because I’m routinely reaching across several keyboards during performances. By using the ISOMAX, my vocals can be captured faithfully and consistently – without having to maintain a rigid position as is necessary with a fixed, traditional microphone. The fit of the ISOMAX permits all of this to happen without any loss of high quality sound. Equally important is the microphone’s secure, comfortable fit, which enables me to remain focused on the nature of the event and the performance of the music.”

Kuk reports he is the proud owner of two ISOMAX Headset microphones, “I own two Countryman ISOMAX Headset mics plus one in-line power unit for those venues that don’t have Phantom Power available. I purchased my first ISOMAX in 1986 and the second unit came along about two years later. Both mics have been exceptional. I’ve never had a failure with either of my ISOMAX Headsets. I usually get out the backup unit a couple of times throughout the year – just to ensure that it still works. And of course, it works flawlessly!”

During the course of his ownership experience, Kuk has had a few occasions where he sought advice or had a question about using his ISOMAX Headsets. On each occasion, he reports Countryman’s customer service has been first rate. “The few times that I called Countryman’s customer service,” he said, “I was answered promptly and treated as a long lost friend, which I consider as a step above the status of a loyal customer. My technical questions were answered on the spot. The entire staff was 100% professional. I’ve been very impressed.”

Before shifting his focus to some upcoming projects, Kuk offered these parting thoughts, “The Countryman ISOMAX Headset has become my ‘Battle Buddy’ for whatever the occasion where I perform my music. This rock-solid and very dependable piece of professional equipment has become a unique part of my lifestyle as a musician in the service of my brothers and sisters in uniform. I cannot imagine being without my ISOMAX.”

For additional information about the services of Michael L. Kuk, PhD., contact him at [email protected]