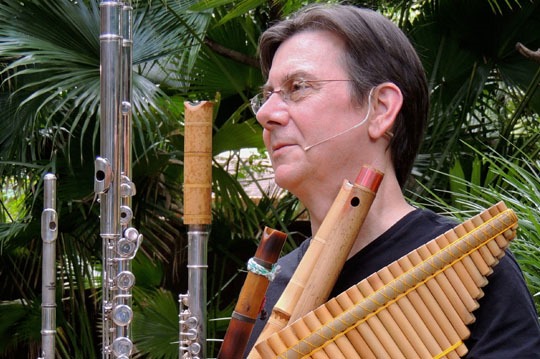 Houston, TX — September, 2012 … With the exception of percussionists—who play a wide range of conventional and not-so-conventional instruments—most musicians get known for performing on a single or narrow assortment of instruments. Not so for multi-flautist Bob Chadwick. As a classically trained musician who performs primarily jazz and original improvised music drawing on Japanese, Indian, and Andean traditions, Chadwick performs with a broad assortment of flutes, most of which are rarely seen in either traditional orchestral or jazz ensembles. When his performances are to be recorded or require sound reinforcement, choosing the right microphone is critical and, for this, Chadwick relies upon E6 Omni and E6 Directional Earset Microphones from Menlo Park, CA-based Countryman Associates.

Chadwick’s flute collection is impressive. He performs with ethnic flutes such as the bansuri (India), shakuhachi (Japan), quena and pans (Bolivia and Peru), dizi (China), ney (Turkey), and whistles (Ireland) while his Western flutes include the piccolo, concert, alto, bass and contrabass. He also performs on the alto shakulute (a hybrid alto flute with a shakuhachi head joint). Chadwick has performed using multiple flutes for Broadway shows including Miss Saigon, Flower Drum Song, and The Lion King, and his recorded performances include the 2011 CD release titled Dharma, among others.

When performing, Chadwick simply wear the E6 mic on one ear—just as a speaker or singer would wear it—and the mic element picks up the sound of the flute. “I’ve become a big fan of the Countryman E6 Omni mic with the flat response cap as well as the E6 Directional mic, which I use with the cardioid and hypercardioid caps,” Chadwick reports. “When I perform in a quiet concert setting such as a video, I use the E6 Omni with the flat response cap. This is the most open sound and is exceptional for recording. For performances in a tight setting where audience noise is present, I prefer the E6 Directional, as I’m able to achieve more gain before feedback. By recording the performance using the E6 Directional, it doesn’t pick up anything but the flute.”

“When I recorded the CD Dharma,” Chadwick continued, “the audience was all around us, enthusiastically cheering us on. Even with all the ambient noise, the recorded flute tracks contained only the flute. The E6 Directional mic’s high gain and rejection characteristics are terrific. I was very pleased to have the flute tracks isolated from the other tracks, so I was able to add reverb after the fact. The result was wonderful!”

“The Countryman mics provide an incredibly open and natural sound,” Chadwick says. “The E6’s design puts the mic close to the sound, but not in front of it. As a result, you’re not playing into the mic but, rather, across it, and this is how you achieve accurate sound. By being able to choose the mic capsule that is best suited for both the instrument and the nature of the performance, I’m able to consistently achieve the best possible sound quality.”

While it’s difficult to pinpoint just one flute as his primary instrument, the bass flute is often Chadwick’s instrument of choice these days. Sometimes, however, he’ll use five or six different flutes in the performance of a single piece. “Regardless of the instrument, I place the mic as close as possible to the corner of my mouth,” he explained. “The exception is the pan flutes, which have a very strong burst of air that comes back at you from the closed tubes. With this instrument, I lower the mic slightly below the corner of the mouth and always add the wind screen.”

Whenever he’s had questions, Chadwick says Countryman’s support services have been exceptional, “The Countryman support staff is stellar. They always take the time to discuss any issues or concerns I may have. I feel as though they are family.”

Before shifting his attention to some forthcoming projects, Chadwick summarized his experience with Countryman microphones, “The freedom I experienced when I finally started playing without a mic stand was incredible. I can move around as much as I need or want to, it’s great! By performing with an earset mic, I no longer get a sore neck or back from the bad posture that using a microphone on a stand often leads to. The fact that I play multiple flutes made it impractical to use clip-on mics, so the earset-type mic is, by far, the best solution. I tried many brands and styles of earset microphones, and was unhappy with the response, tone, and the bulkiness of the units until I discovered Countryman. The Countryman mics have an open and clear sound, so the flutes sound wonderful. These earsets have a comfortable, secure feel and their response characteristics are great for all my flutes.”

To learn more about Bob Chadwick or to purchase one of his recordings, visit him online at www.bobchadwickflutes.com.