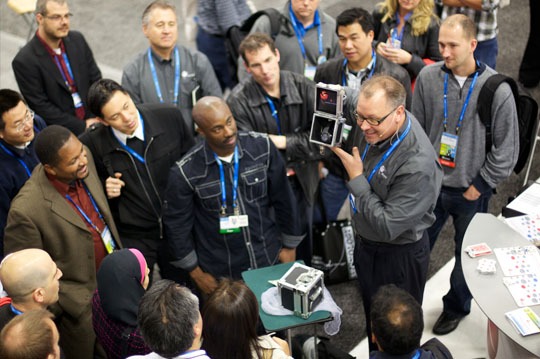 Menlo Park, CA — May, 2012 … Tradeshows are a great place to discover the latest, greatest products. Regardless of whether it’s an automobile tradeshow or one for the countless other products and services available these days, there are always people demonstrating the newest offerings. While many manufacturers use models or product specialists to present their wares, others want something a bit more unique—and that’s where tradeshow magician Scott Tokar comes in. Outfitted with his trusty Countryman E6 Omni Earset Microphone, he consistently puts a fresh spin on tradeshow presentations.

Tokar is not only a magician; he is the founder of Corporate-Fx, a firm dedicated to maximizing a company’s tradeshow visibility by attracting prospective customers through the use of magic. The ability to communicate clearly and effectively while pitching a company’s products or services is paramount to Tokar’s business, as is the freedom to use both hands. After trying a variety of microphone types, Tokar quickly realized the lightweight, robust performance of the Countryman E6 microphone made it the right tool for the job.

“I’ve been using the E6 for several years,” Tokar reports. “The firm actually owns two units so that other magicians working under the Corporate-Fx brand can also use them. The sound quality of this microphone is terrific and I know I can count on the E6 to help me communicate clearly to my audience. I never worry about not being able to be understood while speaking.”

“I also find the microphone’s rugged, reliable build quality to be first rate,” he continued. “I regularly wear this mic eight hours a day and I frequently remove it from my ear and place it in my shirt pocket between demonstrations. I know I can count on the E6 to retain its shape so that I don’t have to constantly adjust it to fit my face. I have the mic set the way I like it positioned and each time I put it back on, it goes right to the position I want. I never worry about the mic shifting position and audio quality remains consistent the entire time I’m working. My E6 is never distracting and, as a magician who needs to use both hands, it enables me to focus on communicating with my audience.”

Because his E6 is constantly being taken off, placed in a pocket, and later placed back on his face, the cable encounters a lot of pulling and tugging. “I use the thicker, 2 mm cable with my system,” Tokar explained. “I find this cable is extremely robust for my type of working conditions. For me, this is one of the E6’s most important features.”

Because the E6 uses replaceable cables to interface with a variety of wireless systems, Tokar knows he can use his microphone just about anywhere. “I normally use my E6 with a Sennheiser ew 100 wireless system,” he says, “but I also have several cables for use with other manufacturer’s wireless equipment. I never worry about working a site where I go through the house system because the interchangeable cables enable me to easily adapt the microphone to a variety of wireless makes and models. This capability has saved me a lot of headache over the years.”

Before directing his attention to an upcoming appearance, Tokar summarized his experience with his Countryman E6, “I use this mic as a regular part of my work. To me, it’s as personal as a toothbrush or anything else that you use daily. I somewhat feel as though I’m not fully dressed if I go out on stage without my E6. It is a very trusted business tool.”

To learn more about Scott Tokar and Corporate-Fx, visit them online at www.corporatefx.com.