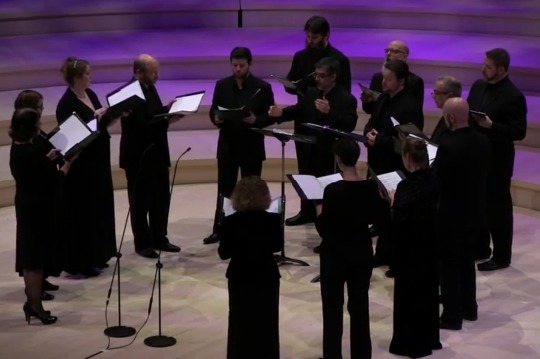 Stanford, CA… On February 1st, Stanford University’s performing arts presenter Stanford Live hosted a concert by the storied Cappella Romana vocal ensemble of Portland, OR. The ensemble’s name—meaning Roman Chapel—refers to the medieval Greek concept of the Roman oikoumene (inhabited world), which embraced Rome and Western Europe, as well as the Byzantine Empire of Constantinople (“New Rome”) and its Slavic commonwealth centered at Moscow. Recognized for its exploration of Eastern Orthodox vocal music, the ensemble’s performance at Stanford University’s Bing Concert Hall—titled Cappella Romana: From Constantinople to California—combined old world Byzantine chant with the latest innovations in music technology from Stanford’s Icons of Sound project, to recreate the acoustics of Turkey’s legendary Hagia Sophia.

Built from 532 – 537, Hagia Sophia was a former Orthodox patriarchal basilica, later a mosque, and now a museum in Istanbul. It has an immense marble and mosaic interior space over 230 feet long and 1634 feet wide, with its main dome 184 feet above the bookended marble floor. Its size and materials make Hagia Sophia extremely reverberant, with a decay time of nearly 11 seconds—a unique acoustic that influenced the music written for and performed in the building. Byzantine chant was last heard in Hagia Sophia in the mid 1400’s, and the idea behind the ‘Constantinople’ portion of the concert was to simulate the experience of centuries-old chant in Hagia Sophia. To transform the new Bing Concert Hall into a virtual Hagia Sophia, 15 Countryman B2D Directional Lavalier microphones were used to individually capture the performers’ voices. The mic signals were processed according to the acoustics of Hagia Sophia and sent to 24 QSC Audio HPR122i loudspeakers and six QSC HPR181 subwoofers strategically placed about the hall.

Jonathan Abel, a consulting professor at the Center for Computer Research in Music and Acoustics (CCRMA, as in karma) in Stanford’s Music Department, lead the technical side the project. “While the live concert took place February 1st,” he explained, “the performance was the culmination of inter-disciplinary work involving humanities scholarship, scientific research and music performance dating back to 2008 when Professor Bissera Pentcheva of Art & Art History and I conceived our Icons of Sound effort, a project that explores the acoustics and aesthetics of the interior of Hagia Sophia. We first studied the acoustics of Hagia Sophia by analyzing balloon pop recordings made in the space, and then developed methods for simulating chant performance in Hagia Sophia. We had an experimental recording session with Cappella Romana in 2011, and have been working toward this concert since then.” 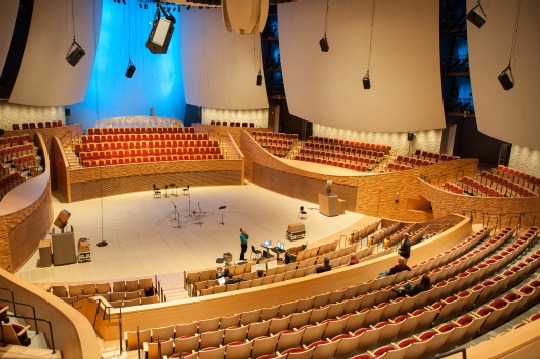 Stanford’s Bing Concert Hall was opened this January 11th. The venue’s 842 seats are arranged in a ‘vineyard’ format, with seating sections ringing the stage. Additionally, the center-section seating begins on the same level as the stage—creating a unique intimacy in the space. Bob Cable, an associate of Jonathan Abel at Stanford, summarized the nature of the space, “Bing Concert Hall is visually stunning, with excellent sight lines and a warm, intimate feel. The textured surfaces and concave sails create a diffuse sound field, while deployable drapes between the sails and over certain textured hall surfaces provide a means to tailor the hall acoustics to the performance. In the polyphonic first half of the Cappella Romana concert (which didn’t have enhanced acoustics), the drapes between the sails were removed to provide more reverberation. In the second half of the concert, all drapes were deployed to make the hall as dry as possible to reduce the complexity of the virtual acoustics processing.”

Hagia Sophia’s unique acoustics dramatically impacts not just the sound, but the performance itself. Vocalists slow their tempo to work with the nearly 11-second-long reverberation time, while isokratima (the drone chanters) subtly vary their pitch to find building resonances. As a result, to create a virtual performance, the performers must hear the space in real time. As part of the acoustic modeling of the Hagia Sophia, recordings of chant were created whereby the vocalists were outfitted with Countryman E6 Omni Earset microphones for capturing the ‘dry’ unprocessed vocal performances while they monitored simulated acoustics (based on the balloon pop recordings) through earphones. In post-production, the recorded dry tracks were processed to produce performance recordings in a simulated Hagia Sophia. The original mixing was done in CCRMA’s 3D Listening Room using a built in Ambisonics decoder and 22.4 loudspeaker configuration. The final mix was played as part of an outdoor concert using a 16.4 system and a combination of 2D and 3D Ambisonics decoders.

The concert in Bing Concert Hall consisted of the Cappella Romana performers each outfitted with a Countryman B2D directional lavaliere microphone while the space had the QSC Audio HPR122i loudspeakers and HPR181 subwoofers strategically positioned throughout the hall—above both the performers and the audience as well as on the sides of the room. What the audience heard, then, was a combination of live vocal performance and the processed performance from the loudspeakers all about them.

“For the live performance at Bing,” Abel reports, “the challenge stemmed from the extremely wet, reverberant acoustics of Hagia Sophia, which can easily produce feedback between the vocalists’ microphones and the loudspeakers in the hall. For the performance, we used the Countryman B2D lavaliere mics affixed to each performer’s forehead and pointed downward, in combination with Shure UHF-R Series wireless bodypack transmitters and receivers and, of course, the full range loudspeakers and subwoofers. The B2D mics are directional, and by positioning them like we did, we were able to pick up the performers’ vocals and achieve the necessary isolation from the loudspeakers.” 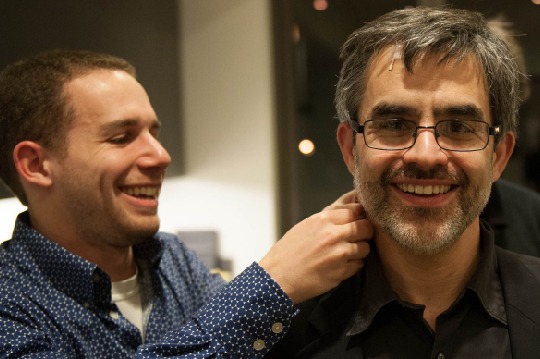 Abel continued, “We also chose these microphones because we needed to isolate the performers’ voices from one another to both separately locate them in the virtual space, and to have separate vocal tracks for post-concert production. Equally important, we wanted a microphone that was sufficiently comfortable so the performers would not be at all distracted and forget they were wearing them—thus creating the mindset they were performing in the actual space. Further, we wanted a microphone without a boom so as to avoid any stray sounds getting into the virtual space with its nearly 11-second-long reverberation time.”

As it turns out, the virtual acoustics system proved useful in another context: “Cappella Romana had a concert at Stanford’s Memorial Church the following evening, but could not access the church to rehearse,” notes Abel. “They ended up rehearsing in CCRMA’s small recital hall, with the B2D’s attached and the processing designed to simulate that environment.” 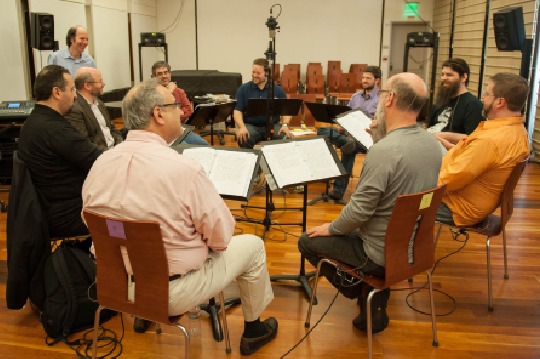 For the Bing performance, a Linux-based computer for live auralization running Ardour2, jconvolver and Ambisonics, was outfitted with an RME RayDAT PCI Express audio interface that was slaved to a Yamaha digital mixing console via word clock. The system received the microphone signals through two ADAT links coming from the Yamaha mixer. Jack 1.9.9 was used as the main audio connection and distribution system, and it was running during the performance at 256 x 2 at a sampling rate of 48 kHz. Given the nature of the system being simulated, ultra-low latency was not required.

The Cappella Romana performances at Bing Concert Hall and Memorial Church presented a terrific opportunity for the audiences to gain an understanding and appreciation of communal worship as it might have been experienced in the sacred structures of centuries long past. Abel reports the concerts were a tremendous success, “Wonderful performances and an incredible new venue—truly transporting.”