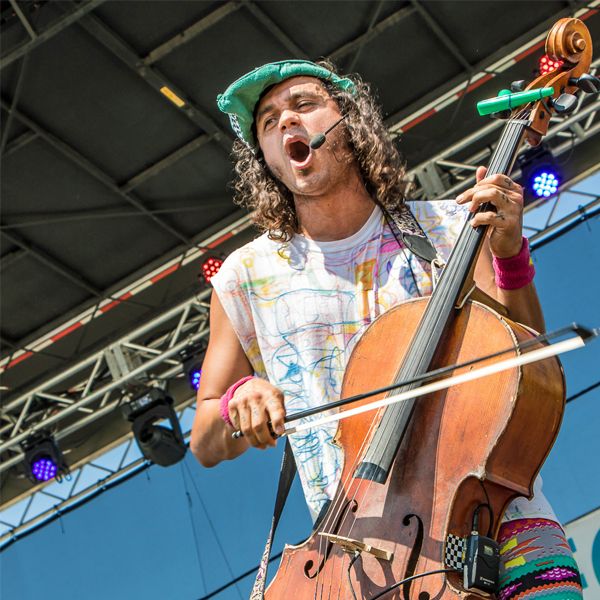 Rushad Eggleston with his ISOMAX Headset

Stellar sound quality and freedom of movement make all the difference

Carmel Valley, CA – November 2015… Most often, the cello is perceived as an ensemble instrument—typically as part of an orchestra or a string ensemble backing an entertainer. And while there is solo literature, nothing can prepare one for the performances of avant garde cellist Rushad Eggleston, also known as the Ambassador of Sneth or the Cello Goblin. As an entertainer, the freedom to move about is crucial to Eggleston. Unlike most cellists, he straps his instrument on and delivers high-energy vocals as he moves around the stage. That’s precisely why he depends on his ISOMAX Headset microphone from Menlo Park, CA-based Countryman Associates.

Eggleston was educated at Berklee College of Music and, while there, developed his ‘rootsy,’ energetic style of music that has since become his musical signature. In addition to playing the cello, he also shreds the guitar on occasion. Either way, his hands are occupied and the nature of these instruments severely limits his ability to work with a conventional microphone on a stand. Eggleston discussed his fondness for the Countryman ISOMAX Headset microphone.

“I play cello with a strap while I sing wildly—yelling, rapping and speaking in fast tongues and mythical languages,” Eggleston explained. “My music is fast, bouncy, energetic, and cartoonish, and I like to jump and skip and dance and fall down a lot to get the idea across. I act out mythical tales while singing about them. As part of this, I jump over chairs and stand on tables and speakers and lie on audience members’ laps. This is why the ISOMAX is integral to my show. I couldn’t possibly be tethered to a mic stand.”

“The ability to move freely during performances is what led me to look for an alternative to a traditional mic on a stand,” Eggleston continued. “These days, I use a black Countryman ISOMAX. This is a sturdy, great sounding mic that that can be easily adjusted for proper pickup. Once adjusted, it stays securely in place, which enables me to focus on the performance and not worry about the mic’s position. The Countryman ISOMAX stays on my face—no matter what. I can roll on the ground like a dog, shake my head, or even hang upside down and the mic stays right where it should. I also own an ISOMAX 2 Instrument mic, which I am equally pleased with.”

When queried about those audio-related attributes that make the Countryman ISOMAX such an important tool, Eggleston was quick to point out the microphone’s high gain before feedback and musical quality. “This is a great sounding mic,” he said. “Speech intelligibility is always crystal clear, so every word sounds clean and natural. I’ve also been really impressed with the mic’s ability to withstand high SPL’s. Sometimes, such as when I’m working with my ‘frog-metal’ band called Tornado Rider, I end up screaming over extremely loud drums and bass. Even then, I get plenty of level in the monitors without feeding back. I am amazed at how well the mic works in these conditions.”

For any performer, the ability to get questions answered in a timely fashion is a crucial consideration when making equipment purchases. Here too, Eggleston has high praise for his experience with Countryman Associates. “Every time I’ve needed support, I’ve been able to get right through to the Countryman staff for answers,” he reports. “I’ve also been very impressed with the reliability of these mics. I’ve never had a mic stop working during a show— and I’ve had a lot of beer, water and more poured on me during shows.”

Before redirecting his focus to upcoming performances, Eggleston offered these final comments regarding his experience with his Countryman microphones, “I think Countryman mics are awesome. My wild, semi-acrobatic style of performance that I’ve become known for would not be possible without this technology and I am forever indebted to Countryman because of that. Whatever performance situation I encounter, my ISOMAX lets me run around and totally be myself without compromising clarity or sound. These mics can handle everything from the ridiculous to the sublime. I simply wouldn’t walk onstage without my Countryman mic.”

To learn more about Rushad Eggleston, visit him online at www.rushad.net or www.facebook.com/rushadeggleston. His music is available at www.rushad.bandcamp.com.