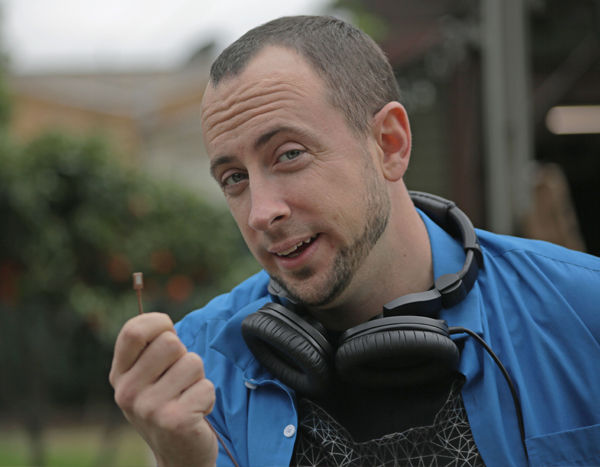 Los Angeles, CA – March 2015… For the production professional who works both on location and in post production, the process of seeing one’s work progress from the field to on-air broadcast is most rewarding. Such is the case with Encino, CA-based ‘Preditor’ (Producer / Video Editor) and Audio Engineer Jacob Voelzke. Voelzke’s work takes him around the world and, as part of his equipment arsenal, he relies on the robust audio performance and rock-solid reliability of EMW Omnidirectional Lavalier microphones from Countryman Associates of Menlo Park, CA.

Since graduating from the highly-regarded Full Sail University with a degree in Recording Arts, Voelzke has worked with the John Lennon Educational Tour Bus, where he spent 3 years touring the country and recording several Grammy®-winning artists, including Fergie’s solo album The Dutchess. Since relocating to Los Angeles, he has focused on production audio and post production audio for film, and has worked on multiple festival-winning short and feature films, music videos, commercials, and television shows—all the while capturing audio with his 3 Countryman EMW microphones.

Voelzke’s next project will take him to Iguazu Falls in Argentina for the travel destinations show Escapeseeker, which will air on PBS later this year. He discussed the challenges of the project and his preference for Countryman’s EMW Omnidirectional Lavalier microphones. “I’ve been working with Countryman mics as a production sound mixer and for audio post for about 6 years,” Voelzke reports, “and they’ve been an essential tool for capturing pristine audio. When I got the Escapeseeker project, I thought to myself, ‘Wow! I have to capture audio on a boat floating in the world’s largest waterfall, and keep my gear dry and signal clean?!’ Selecting Countryman’s EMW mics was an obvious choice for the assignment, as they can be immersed in water and, for years, they’ve provided me with impeccable audio quality.”

When queried about those attributes that make the Countryman EMW Omnidirectional Lavalier microphones the ideal choice for his work, Voelzke offered the following thoughts, “Audio quality is the first priority and, in this regard, the Countryman EMW lavs are exceptional. I also love the EMW’s ability to record underwater and other extreme conditions. I ride my gain high on the talent and, with the EMW’s high gain before feedback, I can really push the EMW mics without worry of distorting the signal. No other mic can handle what I’m about to put these Countryman mics through. I use my mics with Sennheiser ew 100 G3 wireless systems and, together, they make a great combination.”

Voelzke described a past project where his EMW microphones made a big impression, “I was sound mixing on the set of Battlefield America, a feature film that had a theatrical run in 2012. A scene called for a big 360 degree Steadicam shot, where actress Lynn Whitfield walked through a massively open space. There was no way to get the boom mic in without breaking the frame, so it all fell on the wireless lavalier setup to capture the scene’s audio. Lynn’s wardrobe didn’t allow for easy mic placement, so we had to get creative. We placed the EMW mic and wireless transmitter inside a small coffee cup, which Lynn carried throughout the scene. It worked beautifully. The EMW’s low profile enabled us to cram it into a very tiny space, and it even matched the color of the lid to become nearly invisible. This setup and the flexibility we had with the Countryman mic saved this expensive scene and delivered us a pristine audio track.”

For location sound professionals, quality customer and technical support services are essential. Here, too, Voelzke, was very complimentary of Countryman Associates. “I remember watching Chris Countryman demo the EMW mics several years ago and being very impressed,” he said. “I then contacted the company to inquire about the specs. They were very kind and answered every detail of every question I had. Since that time, Countryman mics have been an essential part of my arsenal.”

Before shifting his focus back to the business of the day, Voelzke offered these final thoughts regarding his experience with Countryman’s EMW Omnidirectional Lavalier microphones, “Countryman’s EMW mics allow me to go where no microphone has gone before. It’s a product I can push to the limit without sacrificing dependable results—even when the circumstances make audio capture nearly impossible. As a sound mixer, I need a kit that makes me competitive and brings along a level of integrity that screams ‘pro’, and the EMW lavalier mics provide me with indispensable perks on set that clients never forget. I can’t imagine working a project without them!”

For more information about Jacob Voelzke, visit his website at jacobvoelzke.weebly.com/.