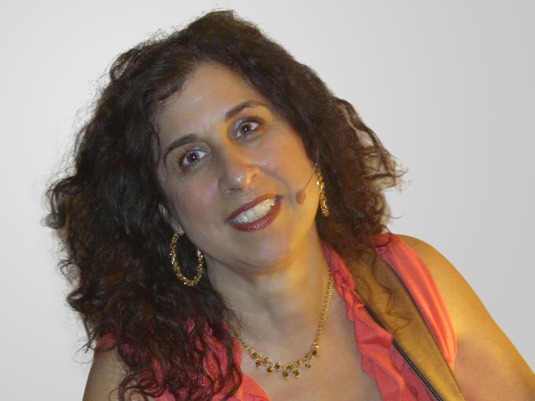 Los Angeles, CA … With a style she calls, ‘Adult Contemporary Eclectic,’ singer/songwriter Shakeh’s unique music deeply affects audiences up and down the West Coast. Working primarily as a solo artist, Shakeh has toured extensively from San Diego to Seattle—playing colleges, festivals, clubs, coffeehouses, and book stores to the delight of all who encounter her music. In addition to her treasured Taylor guitar, there’s one more piece of equipment she considers absolutely indispensable: her E6 Omni Earset Mic from Menlo Park, CA-based Countryman Associates.

“I’ve been using my Countryman E6 since 2003,” Shakeh reports, “and at this point, I can’t imagine going onstage without it. Combined with my Sennheiser wireless system, I now have far greater freedom to interact with my audience than I ever had before.  Regardless of whether I’m flying solo or performing as part of a larger ensemble, the ability to step off the stage and interface with members of the audience is simply not possible with any other microphone system, and that’s a huge consideration. It’s had a dramatic impact on my ability to connect with an audience. You don’t realize this until after you start working with a microphone like the E6, but a regular microphone creates a wall between you and the crowd. Once you remove that wall, the freedom you experience opens up a whole new world. You have so much more opportunity to engage your audience, which I also believe gives me an advantage in the highly competitive entertainment environment.”

In addition to appreciating this freedom of movement, Shakeh praises the exceptional consistency and sound quality of her E6. “I love the consistency of sound that I achieve with this mic,” she says. “The sound quality is terrific and it gives me an added layer of confidence that my sound is as I expect it to be. Regardless of where I perform, the sound is terrific and, most importantly, when I work with sound engineers, they’re always very pleased about the fact that my mic delivers such good audio quality. It makes their job easier too. I also love the fact that I never have issues getting the level I need. The microphone does a great job of maximizing gain before feedback.”

According to Shakeh, a big part of the consistent sound she achieves with her E6 stems from the microphone’s fit. “When I first started using the E6, I was a bit concerned about my ability to fit the mic securely, as my ears are rather small. I quickly discovered, however, that the earpiece is remarkably flexible and, as a result, I’m able to fit the microphone with no issues at all. After all these years of use, I remain somewhat amazed by how flexible and durable the earpiece is. I consistently get a good, comfortable, secure fit. The ability to fit the mic comfortably and securely is a huge factor that enables me to achieve that consistent sound quality I mentioned previously. Once that mic is set, it remains in place and is never the least bit distracting.”

When queried about Countryman’s customer service, Shakeh was quick to label the company as being incredibly responsive, “In all the years I’ve been working with the E6, I’ve only required service once and, even that, was through no fault of the product. I was working a New Year’s Eve gig in 2008 and I suddenly dropped the transmitter pack and in the process, I yanked the mic cable and broke it. I was in a state of panic because I knew that in less than a week, I had another gig on the road.”

“I called Countryman as soon after the New Year as I could. I was very upset, yet I remember the company being incredibly helpful,” Shakeh continued. “I overnighted my equipment to them and they overnighted the mic back to me in no time at all. I had my mic back in plenty of time for my next job. Not only was I extremely impressed with the company’s rapid turnaround, I was equally impressed with the fact that they understood how important this issue was to me. The folks at Countryman were terrific.”

As she prepared for her next engagement, Shakeh summarized her experience with Countryman Associates and her E6 microphone. “I couldn’t be happier with my E6. It’s been really great and I frequently tell other musicians who inquire about my setup, ‘Once you go wireless, you’ll never go back.’ I can’t tell you how frequently people will come up and ask what I’m using for a mic. What I love most about the E6 is the knowledge that no matter where I perform, my mic quality will be everything I need it to be. This mic gives me the freedom to perform without being tied down by a mic cable, and unlike a conventional vocal mic, it doesn’t block my appearance. My E6 always comes through beautifully for me. I absolutely love this microphone.”

To learn more about Shakeh, visit her online at www.shakeh.com.